VH1.com published yesterday that the Boston Herald did report that the police may have a lead in the unsolved murder of JMJ.

From VH1.com:
“According to a report in the Boston Herald, an unnamed witness has told police that Ronald “Tinard” Washington, 43, was an accessory to the murder of Jay (born Jason Mizell), who was shot to death in his Queens, New York, studio on October 30, 2002 […]. Last week, Washington was convicted of six armed robberies for holdups he committed in November 2002.”

Washington told the Boston Herald that he expects to be charged soon as an accessory in Jay murder, but denied being involved.

Read the whole article at VH1.com 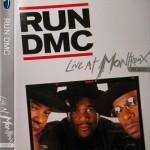 The DVD screens a live show Run-DMC did perform in the Stravinski Auditorium at the 35th Montreux Jazz Festival on July 20th, 2001.